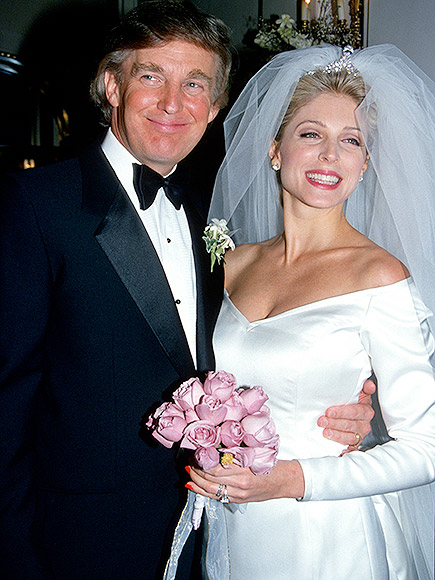 Donald Trump proposed to actress and television personality Marla Maples in 1991, popping the question with the 7.45-carat Harry Winston sparkler.  The ring is now up for auction. Auction house Joseph DuMouchelle will offer the 7.45 carat emerald cut Harry Winston diamond ring, which has a pre-sale estimate of $300,000.Via nationaljeweler.com

“Provenance is often hard to come by when jewelry or artwork changes hands. The Harry Winston ring has multiple levels of provenance including the fact it was made by Winston and owned by Marla Maples and Donald Trump,” says jewelry auctioneer Joseph DuMouchelle. “Fortunately, this ring has it all. The pieces included in this sale are heirlooms of investment quality.” Via time.com

The Emerald Step Cut Channel Set Baguette Solitaire Engagement Ring Series can also be made as a bridal set with a matching band that includes tapered or graduated baguettes that beautifully compliments the simulated diamond emerald step cut solitaire.

Ziamond Cubic Zirconia Jewelers features the finest hand cut and hand polished original Russian formula cubic zirconia coupled with a solid gold or platinum mounting. All mountings are the same high quality mountings used in top jewelry houses.  You can achieve the same look for a fraction of the cost Donald Trump originally spent on the engagement ring that is now auctioned, in addition to its increased estimated worth in today’s market. No one will know the difference!

Update!  The Donald Trump Engagement ring auction for the ring given to Marla Maples fetched $300,000 as previously estimated!